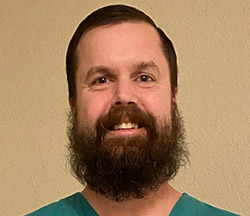 Originally from Florida, I’ve been living out west for 15 years and working at RMTC since February of 2019.  I got into nursing later in life, having worked in the US Marine Corps, private security, and various types of construction previously.  Fortunately, I was able to use my GI Bill benefits to become an RN while also taking care of my now elementary-aged children.

The mental health field is generally underserved here in Montana, as well as nationally.  Anxiety and depression are common mental health issues associated with addiction, and it is rewarding helping people work through those issues here at RMTC.  I personally deal with anxiety, and alcoholism has been an issue for both sides of my extended family, which gives me some personal insight regarding the disease.  Coincidentally my maternal great-grandfather, Richard Perceval, was a severe alcoholic that helped establish AA in Ireland in the late 1940s and later became the first director of the Irish National Council on Alcoholism.

I feel blessed to have a healthy family, a great job, and to be living in such a beautiful part of the country.  In my free time I enjoy anything outdoor related, spending time with my family, and video gaming.